After several bad experiences with other software programs, HealthEast Care System initially said no to using anything other than PowerPoint to create the 1,500 courses it needed. According to Jeanne Siedow of HealthEast, “I was not an easy sell on this one, but a Web conference call changed my tune immensely.” During that call, a SoftChalk course was developed right in front of Siedow’s eyes. The course, which included colorful interactive content, pictures and games, was loaded and ready to use in 15 minutes.

Amazed by the speed at which creative courses could be developed, Siedow was intrigued. However, because the company had been burned before by great-sounding software, they decided to research SoftChalk further and check out some of the education materials it had developed for other clients. After that search, the company was sold on SoftChalk and purchased it in June 2009.

As with most industries, time is a scare commodity in healthcare, so the company wanted a product that produced professional-looking content in minutes versus days. Siedow noted that SoftChalk makes content creation as easy as “child’s play, allowing us to create fantastic-looking courses that go beyond anything we’ve been able to create in the past. SoftChalk has made me a much more effective educator.” In addition, SoftChalk has allowed HealthEast’s employees to complete the mandatory training in less than the standard two-hour timeframe. 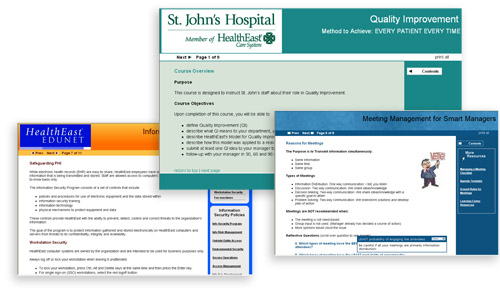 With more than 7,400 employees– ranging from cooks, housekeepers, nurses, office workers, and physicians to the CEO–HealthEast insisted on a product that its employees would also find easy to use. Previous HealthEast PowerPoint™ courses sometimes ran 80 pages in length. With SoftChalk, the company was able to condense the content down to as few as 20 pages without sacrificing any important information.

In addition, because SoftChalk operates much like a web page, the company’s users found it easier to navigate. User comments to date have been outstanding. Said Siedow, “I have received tremendous feedback on the SoftChalk courses. It’s just amazing. The employees think I’ve created some kind of miracle!”

HealthEast is equally pleased with the customer service provided by SoftChalk, noting that the SoftChalk team goes “above and beyond” what is required to ensure that they are satisfied. The company also points out the value of the user guide, which walks the user through the software step by step, including the activities. The software, said Siedow, is “really straightforward. They have thought of everything an educator needs to be able to quickly use it.”

Since implementing the software, HealthEast is able to work more efficiently and calls SoftChalk the “best program ever.”

← Return to all Case Studies
Get Your FREE 30-Day Trial