In 2007, King Abdul-Aziz University in Saudi Arabia sought out FutureU for help with its faculty development. The goal of the program was for faculty with limited technical skills to be able to author their own, pedagogically sound, course websites after completing a six-week training program conducted by FutureU partly online and partly face-to-face. SoftChalk was key to the program’s success.

In 2007, King Abdul-Aziz University in Saudi Arabia sought out FutureU for help with its faculty development. In an invitation-only competitive field, FutureU’s proposal won the contract. The goal of the program was for faculty with limited technical skills to be able to author their own, pedagogically sound, course websites after completing a six-week training program conducted by FutureU partly online and partly face to face. SoftChalk was key to the program’s success.

SoftChalk’s easy-to-learn and easy-to-use interface proved popular with the faculty participants, perhaps most especially with those who had a limited mastery of English. The product’s reasonable pricing structure was a hit with Saudi decision makers. Perhaps most important of all, SoftChalk had a minimal effect on pasted Arabic text. 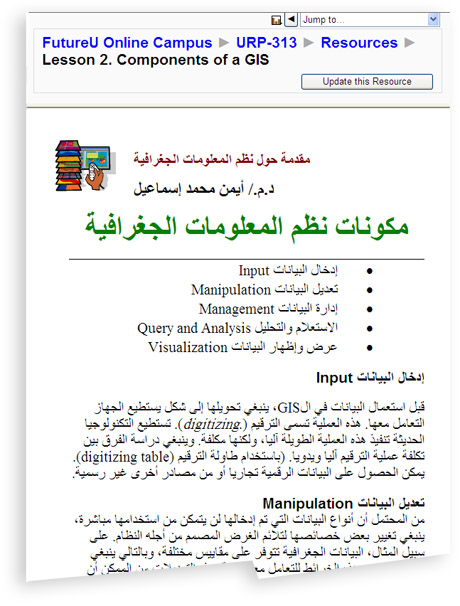 Although all program applicants were required to speak and read English, many would ultimately need to create web pages containing Arabic text. The challenge? Finding an authoring tool that would let faculty cut and paste Arabic from Microsoft Word. Arabic is read from right to left and is right justified. Most of the products tested by FutureU simply turned the Arabic to gobbledygook or, at best, left the text intact but completely destroyed the formatting. Although some tools offered language add-ons, their cost exceeded the program budget. In SoftChalk, most Arabic could be pasted directly, with no change in formatting. Moreover, if the participant used an Arabic keyboard, (minimal) editing could be done within SoftChalk itself.

Faculty had access to one of two course management systems: Moodle, the well-known open source package, and a system called EMES that uses the Arabic language. Both Moodle and EMES are compatible with SCORM compliant zip files, so it was imperative that the authoring tool be able to generate these easily. SoftChalk’s ability to package lessons in SCORM compatible zip files was another element in the program’s success.

SoftChalk also proved excellent for developing creative and engaging interactive content with multi-media components. Before SoftChalk, the more commonly used commercial tools made adding activities either complicated or impossible. The Saudi faculty was particularly impressed with SoftChalk’s learning activities and the ease with which they could be added to content. SoftChalk clearly contributed to the overall success of KAU’s faculty development program—and to FutureU’s superb evaluations.

KAU is located near the Red Sea in Jeddah, Saudi Arabia. It was established in 1967 as one of the Kingdom’s first institutions to grant undergraduate and graduate degrees. Initially private, KAU was converted to a state university in 1971. Its staff of more than 2,300 faculty delivers programs to 40,000 undergraduates and 2,000 post graduates, including 900 doctoral students. Faculty are organized into more than a dozen major academic schools, including not just Science, the Arts and Humanities, Engineering, and Medicine but also Applied Medical Sciences, Pharmacy, Dentistry, Economics and Administration, Home Economics, Earth Sciences, Marine Sciences, Meteorology and Agriculture, Environmental Design, Community Development, and Computing and Information Technology.

The goal of KAU’s distance learning initiative is to offer courses in both English and Arabic to Saudi students living outside the Kingdom as well as those within this 830,000-square-mile country. FutureU’s initial faculty development program for KAU included training—for 22 faculty from 16 separate departments— in how to use SoftChalk as the primary authoring tool for creating course content.

← Return to all Case Studies
Get Your FREE 30-Day Trial